All About Shelf Ice -- Snowshoeing along the Frozen Lake Superior Shoreline

A couple of days ago I went on a beach adventure with friend, Lois Fite.  It was snowing and cold, but I just had to see the icebergs.  Actually, that is what we call them in Grand Marais.  The official name of these frozen structures is SHELF ICE.

We parked at "the front porch" and snowshoed to the edge of the ice. 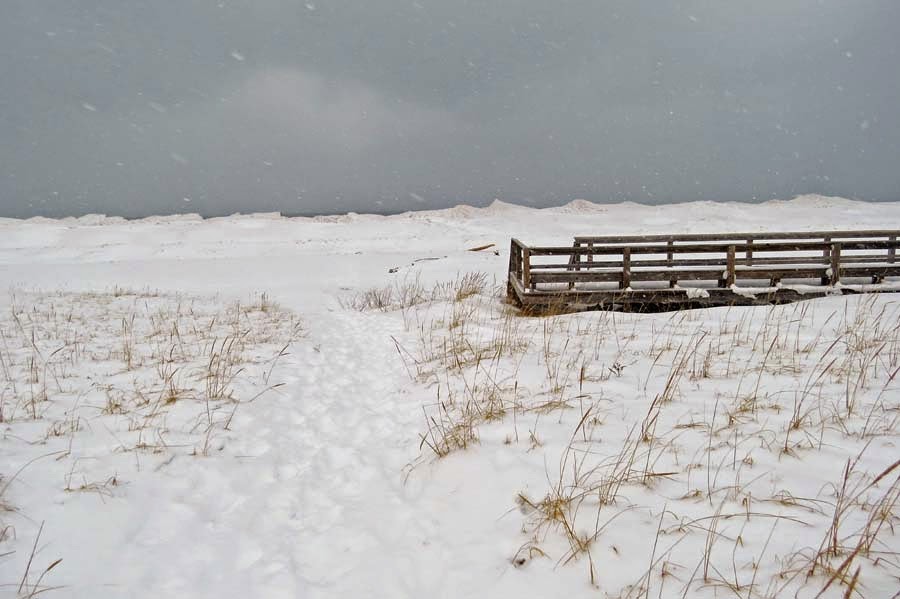 Looking west in the snowstorm.  Lois's dog, Bear, loves the beach -- even in the winter.  So do I. 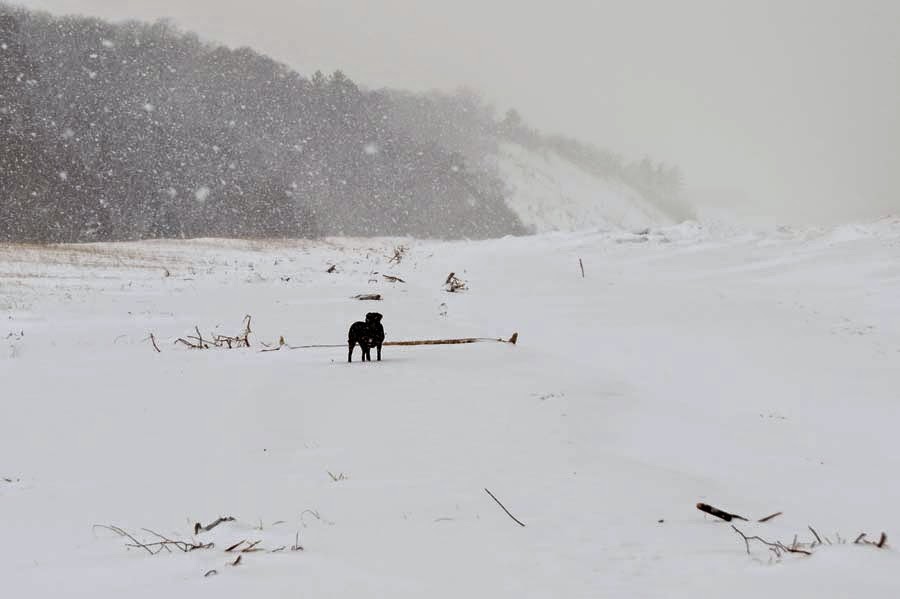 The first row of shelf ice actually forms up on shore.  Shelf ice forms from float ice which develops when cold temperatures freeze small areas of the open lake. Similar ice will form along the shoreline when the lake is calm. Over time, the ice will build up from continued freezing on the open lake and from snow accumulation on the surface.  Because the surface of Lake Superior  seldom remains calm for very long, the entire surface never freezes over intact like what happens in smaller lakes. 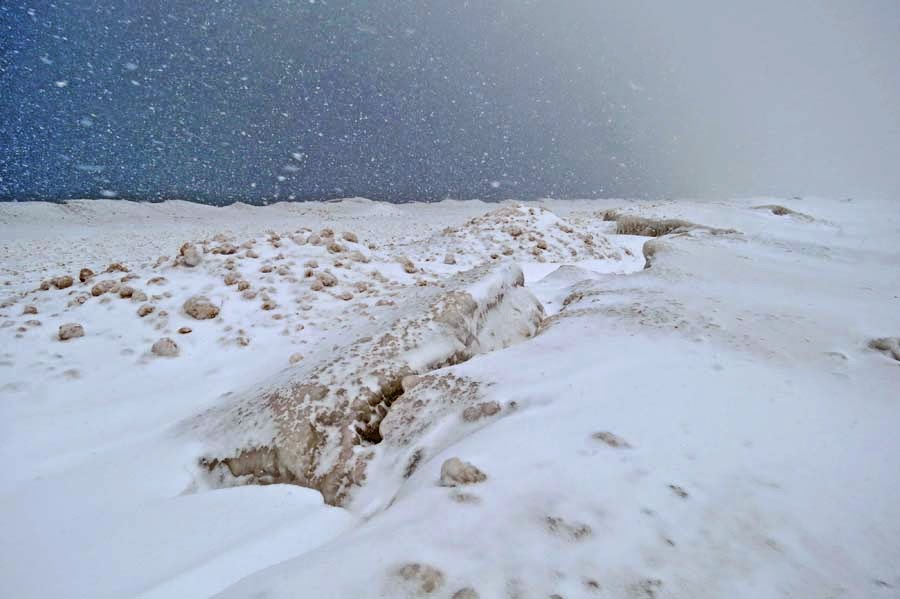 The wind and waves push the float ice. Since the winds are usually from the north and north west, over time the ice accumulates on the southern shore of Lake Superior (and the other Great Lakes). 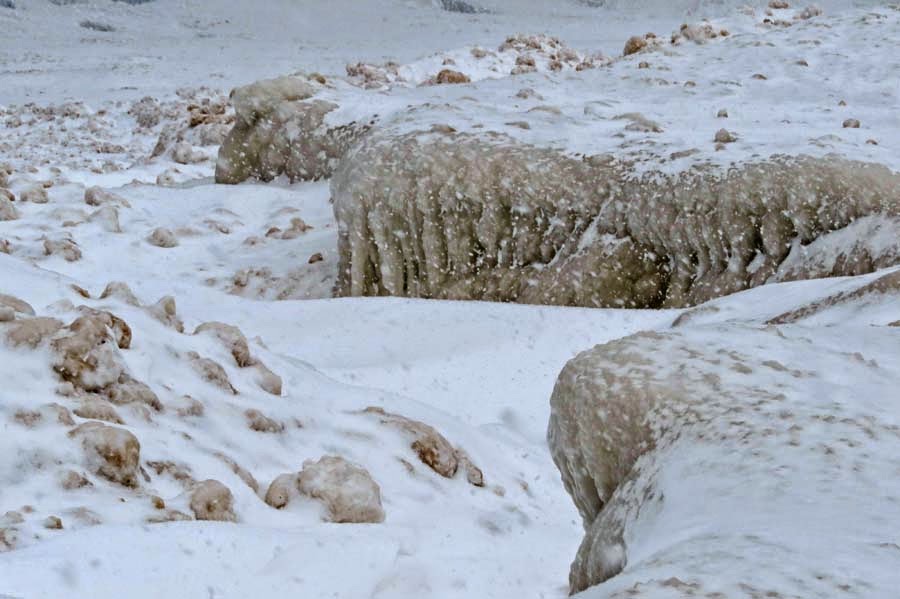 On days with a strong off-shore wind, an ice sheet may reach out into the lakes as far as the eye can see. But across the lake, there is likely to be open water several miles wide.  When the wind direction changes, the ice flows can move back and forth in a very dramatic fashion.  I have seen this game of catch wherein one day there is ice off shore as far as the eye can see -- and then with a wind changing to come from the south -- the next day there is no ice to be seen. 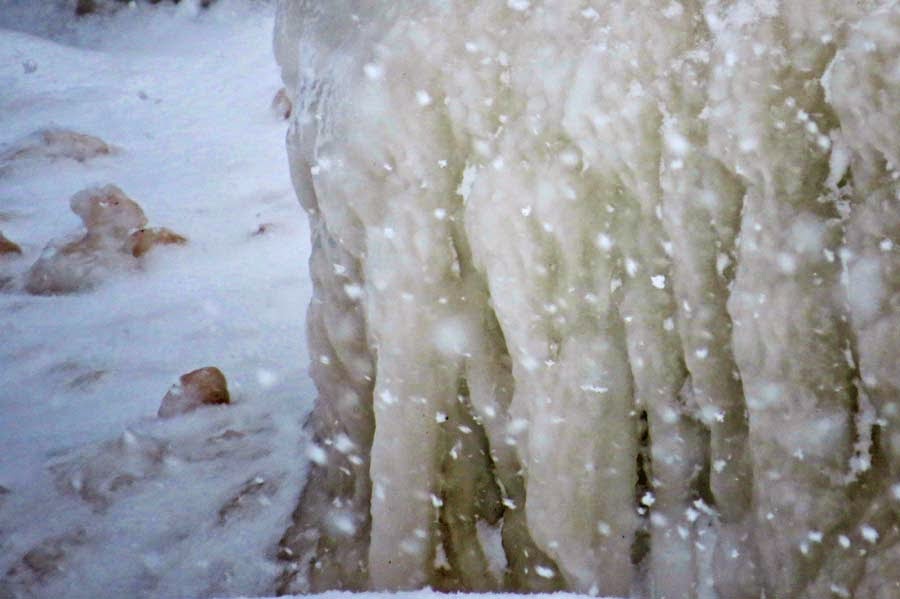 Shelf ice is a floating mat of ice, but unlike a pond or a small lake that completely freezes over in one thick sheet, the shelf is not a uniform accumulation of ice. The shelf ice is a jumble of ice chunks, pushed onto each other. There is nothing stable in the pile. The individual pieces of ice are not initially connected; they only float upon the water surface and rest upon each other.  Since each piece of ice developed independently, each is of a different thickness, creating variations in strength, density, and depth. Many become jammed together but throughout the structure, there are pockets of air. 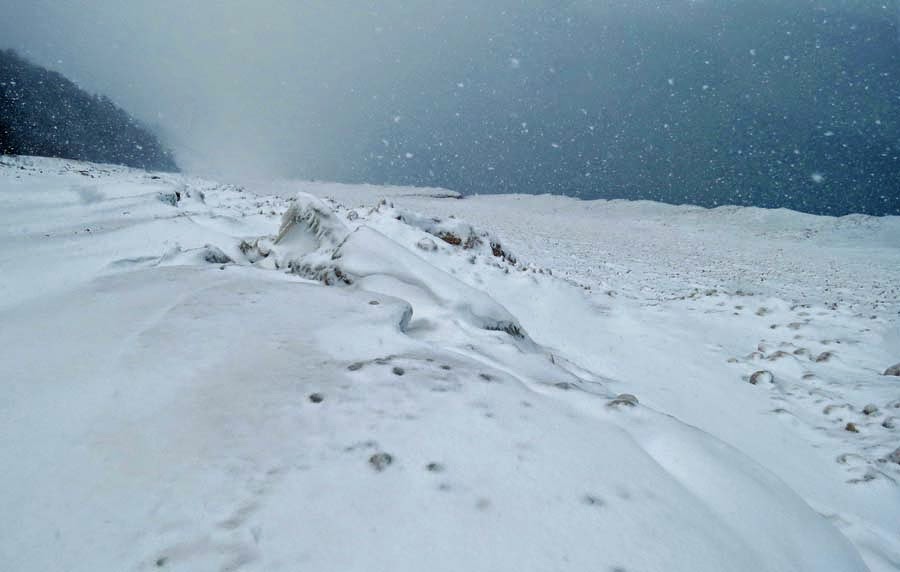 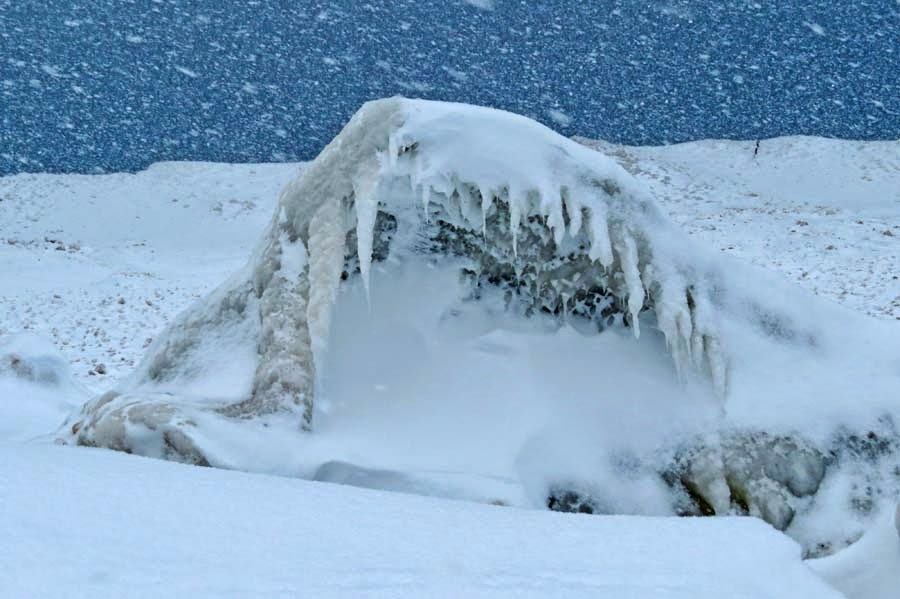 Over time, the ‘shelf’ extends out from the shore in a long-lasting floating ledge. Some of these ridges can become thick and more stable when they ground and rest on the lake bottom as well as through additional freezing from sea spray, precipitation and under surface ice formation.  Repeated melt/refreezing cycles from solar heating and weather variations can also serve to fill in some of the dangerous air pockets.  However, if the original air pockets are large enough -- they can still remain and be hidden by thin caps of snow covering the opening.

Lois and I stayed on the beach. 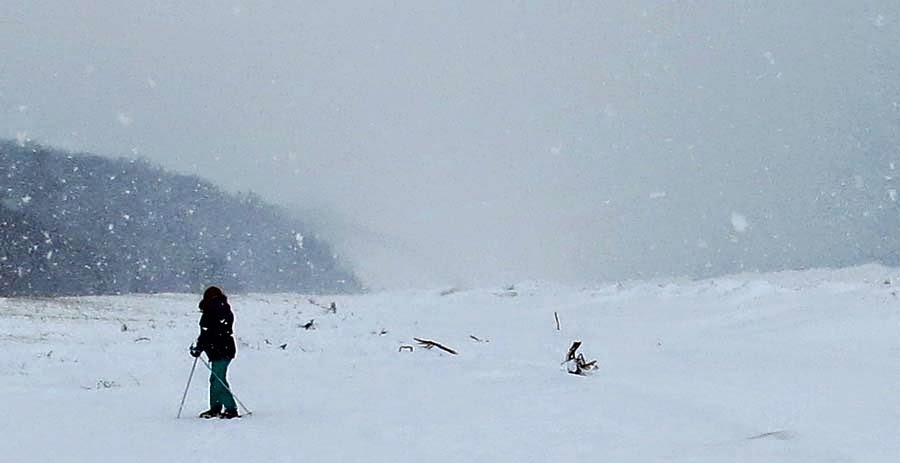 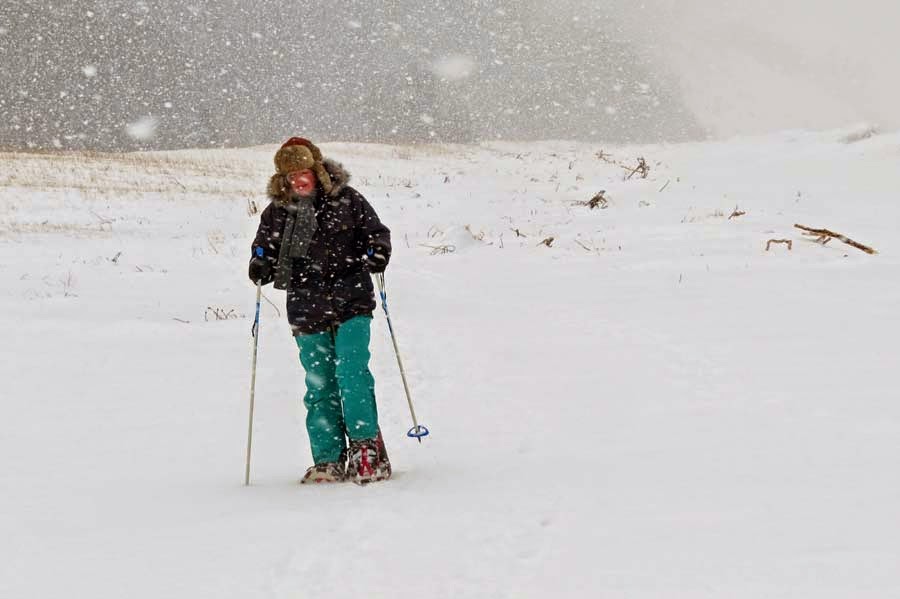 But this group of four did not.  They ventured out onto the first shelf ice ridge. 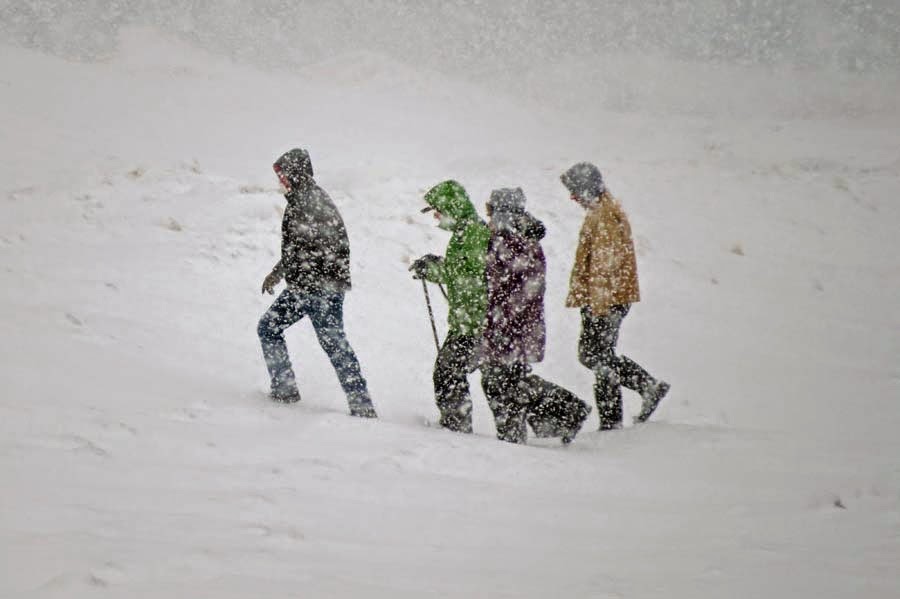 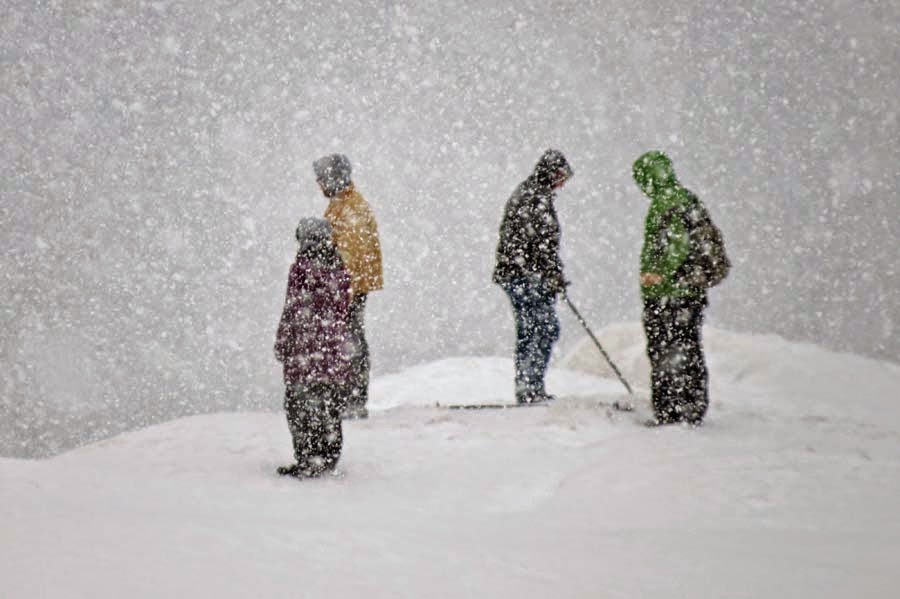 Because of the uneven surface and possible air holes throughout shelf ice, the ice may give way unexpectedly. One can plummet several feet through an air pocket into open water. Self rescue is difficult due to the fragility of the ice and the rate at which the cold water will sap energy. Traveling in a group with the correct ice self-rescue tools lessens the danger. The diagram below shows an air gap opening.  This diagram was recently posted on Facebook. 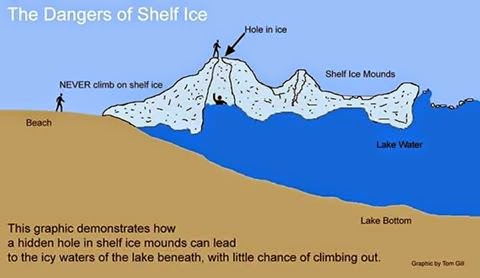