For New Years I went to Madison, WI to visit my oldest son and his wife (Kevin and Jericho).  On New Years day, Kevin and I drove west of town and visited the Cave of the Mounds.  Cave of the Mounds takes its name from the Blue Mounds, two large hills which have long been Wisconsin landmark features. The West Mound, at 1716 feet, is the highest point in Southern Wisconsin; the East Mound reaches 1489 feet. Cave of the Mounds lies under the southern slope of the East Mound.  The area is located west of Madison, WI.  Thanks, Kevin, for suggesting that we visit this fantastic cave!  I did not expect a cave like this in central Wisconsin. 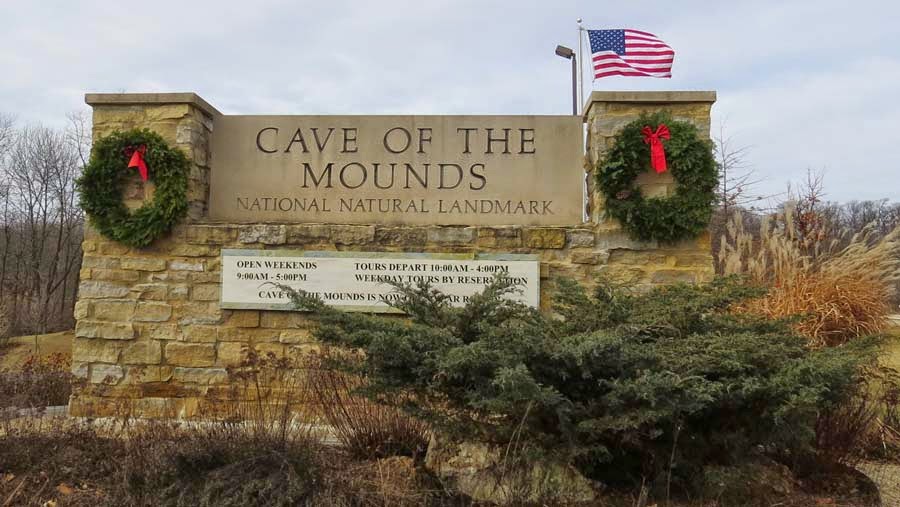 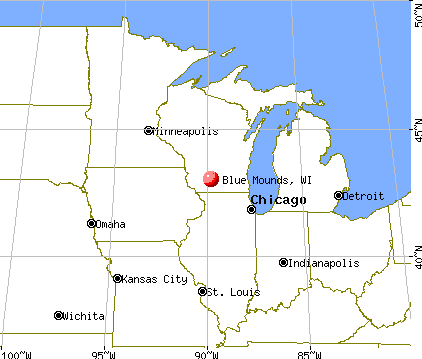 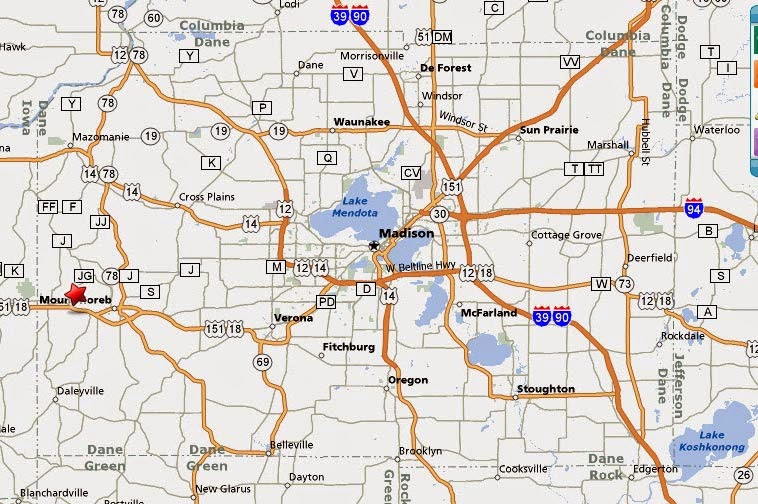 This national landmark was accidentally discovered on August 4, 1939. Workers at a quarry were removing limestone by dynamiting into the mound. The blast revealed a great underground cavern. All quarrying stopped and never resumed. The dynamite blast revealed a limestone cave with several rooms, all containing numerous calcite formations.

The picture below shows the opening of the cave, which has now been enclosed. 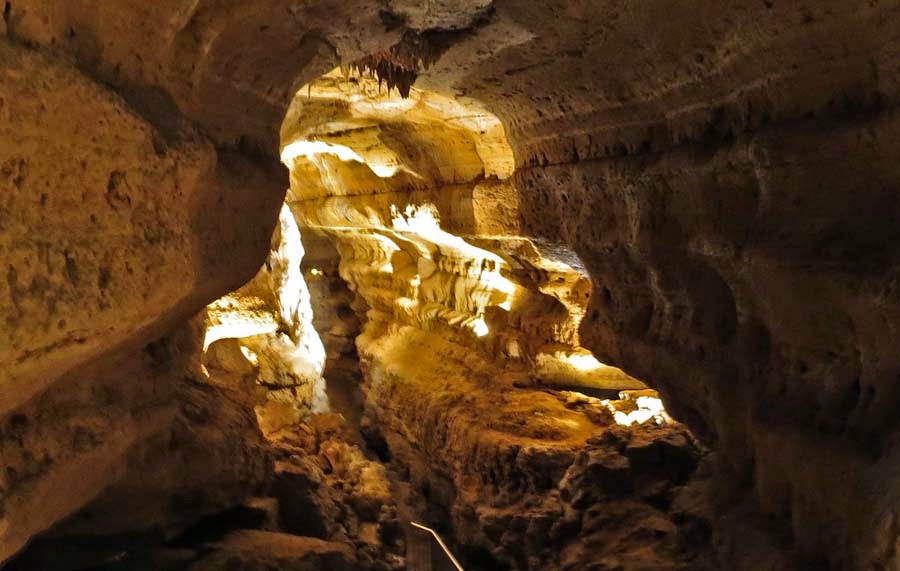 The story of the geologic formation of the Cave of the Mounds began with the natural development of the rock in which the Cave formed. The rock is limestone, a sedimentary rock formed from compacted seashells and other marine sediments. This rock dates back to the Ordovician Period 400 million years ago. During this period warm shallow seas covered part of the North American continent including the area that is now Wisconsin. 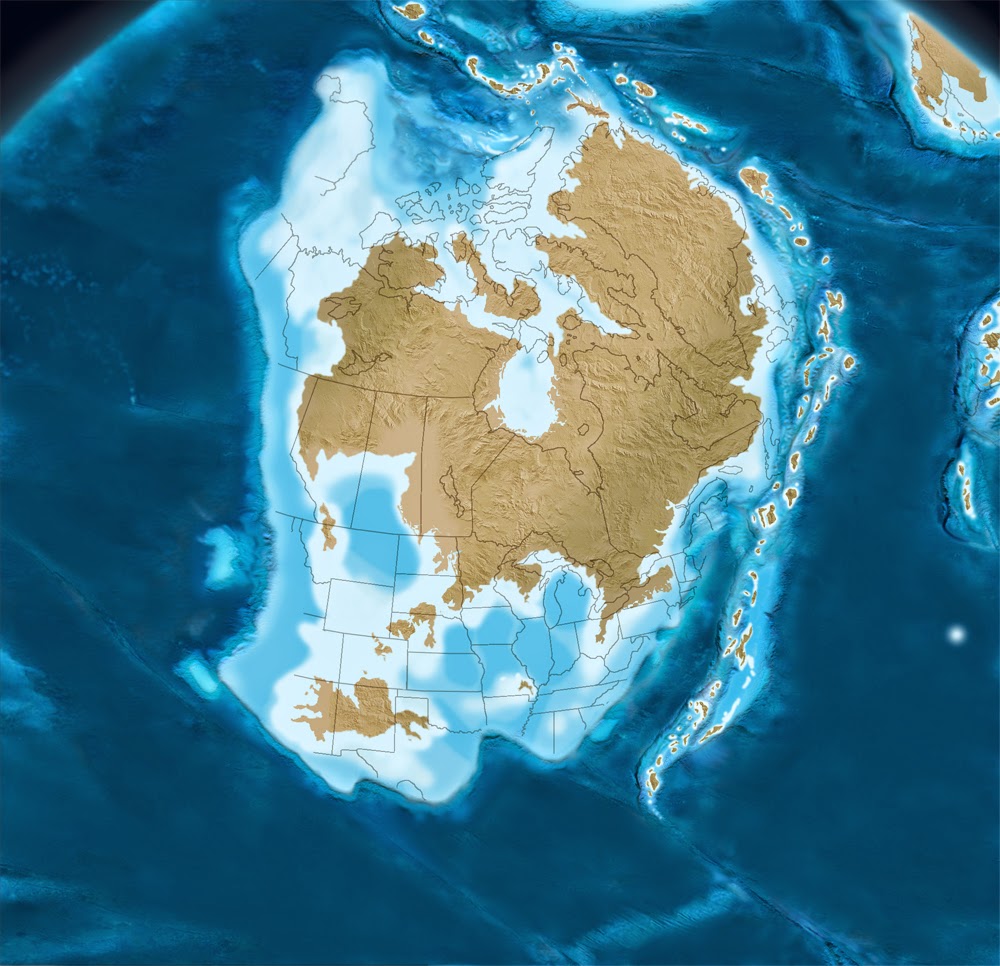 Layers and layers of calcium carbonate shell debris accumulated and slowly hardened into limestone, which is a variety called Galena dolomite.  This specific kind of limestone contains at least 20% magnesium.  Millions of years ago, the seas receded leaving these layers of rock behind.

Cave of the Mounds itself began to form around two million years ago when the Galena dolomite was still beneath the water table. The water table is defined as that level below which all of the rock is saturated with water. This water became acidic when it mixed with carbon dioxide and formed a weak carbonic acid.  This acid water dissolved the limestone and created cavities within the rock. 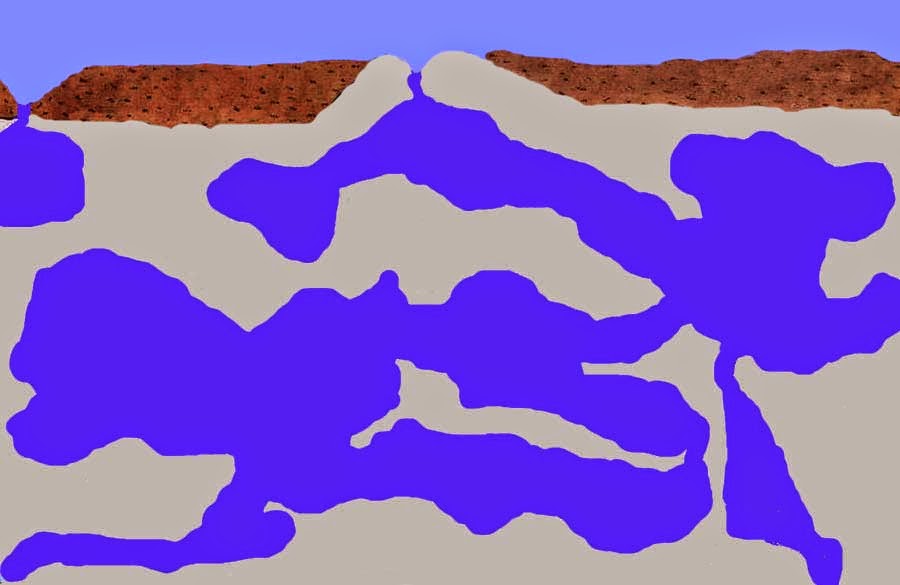 Eventually, the water table dropped below the level where the cave had formed, leaving the complex of natural cavities empty and filled with air. Surface water continued to seep through the soil and then through the porous rock, dissolving small amounts of the limestone (also called calcium carbonate). Every droplet of water entering the cave carried dissolved calcium carbonate. As the water drops entered the air-filled cave, this calcium carbonate was precipitated in the form of calcite. Each drop left calcite crystals on the cave ceiling, walls or floor. The crystals adhered to each other and grew into different kinds of formations, called speleothems. Eventually, stalactites reached down from the ceiling, stalagmites towered upward from the floor, and sheets of flowstone covered the walls and sloped surfaces. 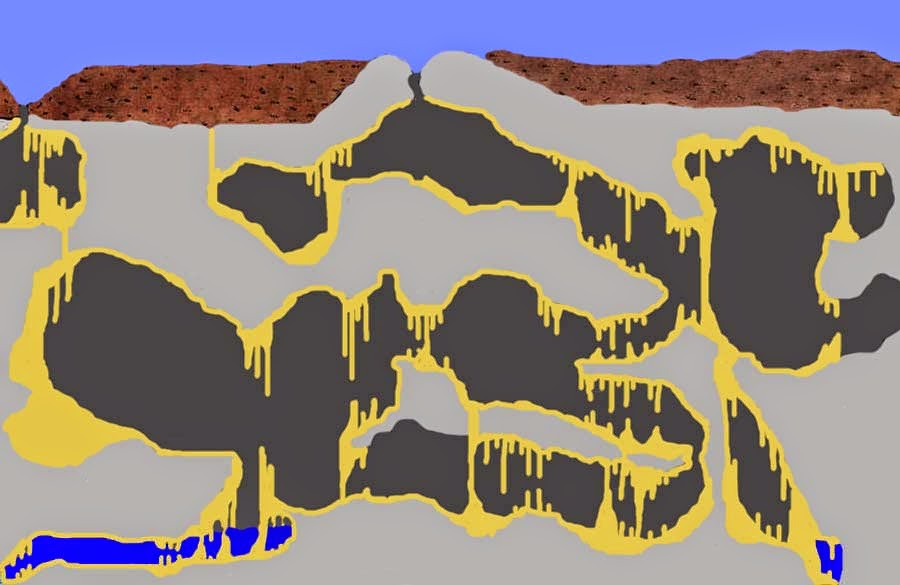 The excitement of the discovery brought so many curiosity seekers that the Cave had to be closed in order to preserve it. Soon, lights and wooden walkways were installed. In May 1940, Cave of the Mounds was opened to visitors. Millions of visitors later, the Cave's wooden walkways were replaced with concrete; a large stone building replaced the original entry building; and theatrical lighting was installed to dramatize the colors and shapes within the Cave. Picnic areas, walking trails, rock gardens, gift shops and a visitor center have all since been developed. 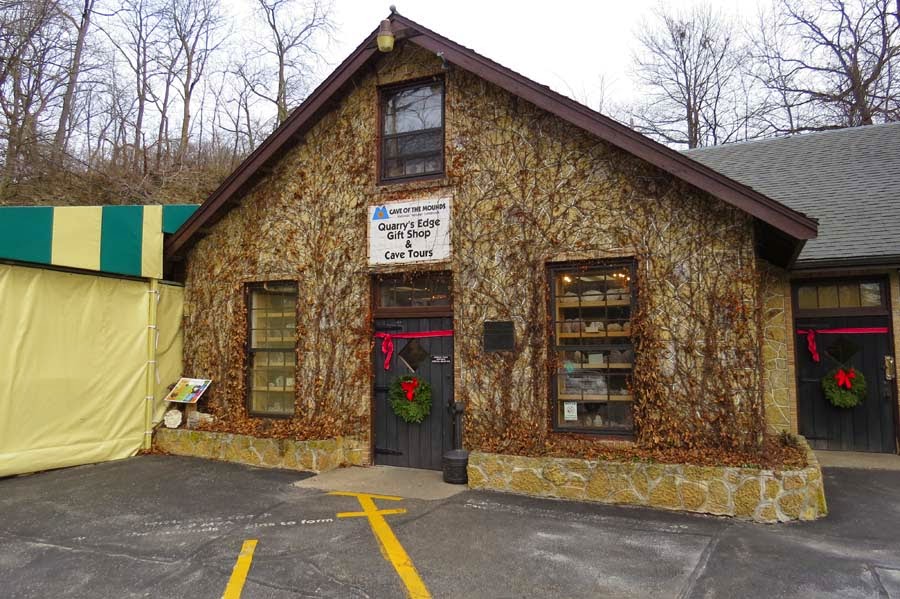 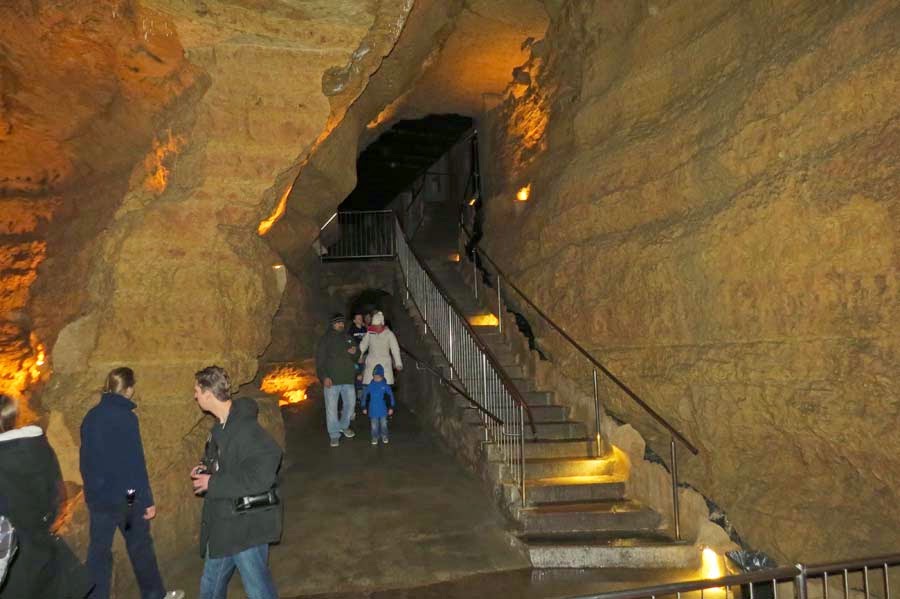 The cave formations grow very slowly. The rate of growth depends on how fast the water flows and on how much dissolved calcium carbonate it contains. It can take from 50 to 150 years to deposit one cubic inch of "cave onyx". This process continues today - a design forever in process and never complete.

Below are some of the photos I took while in the cave.  The rest of the pictures will be posted tomorrow. 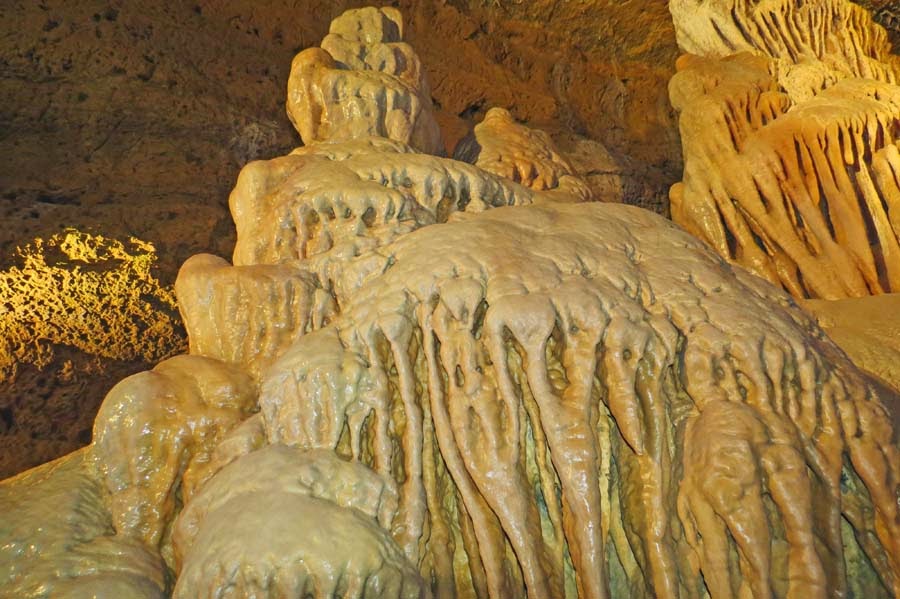 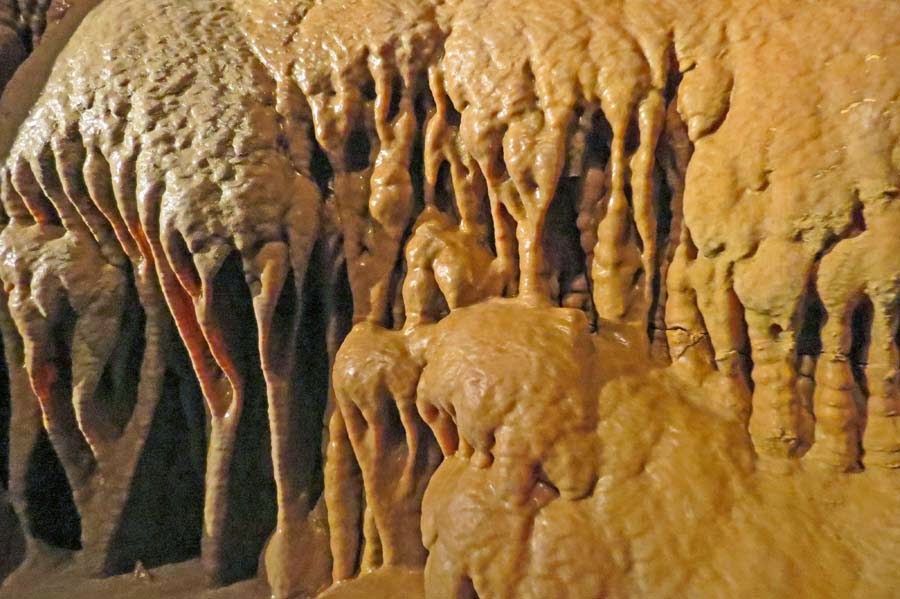 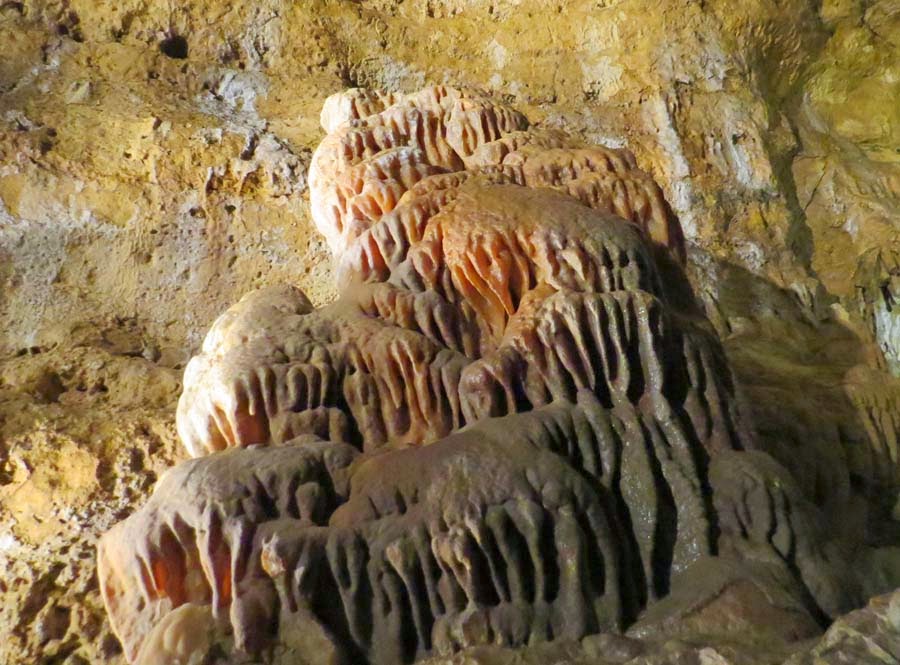 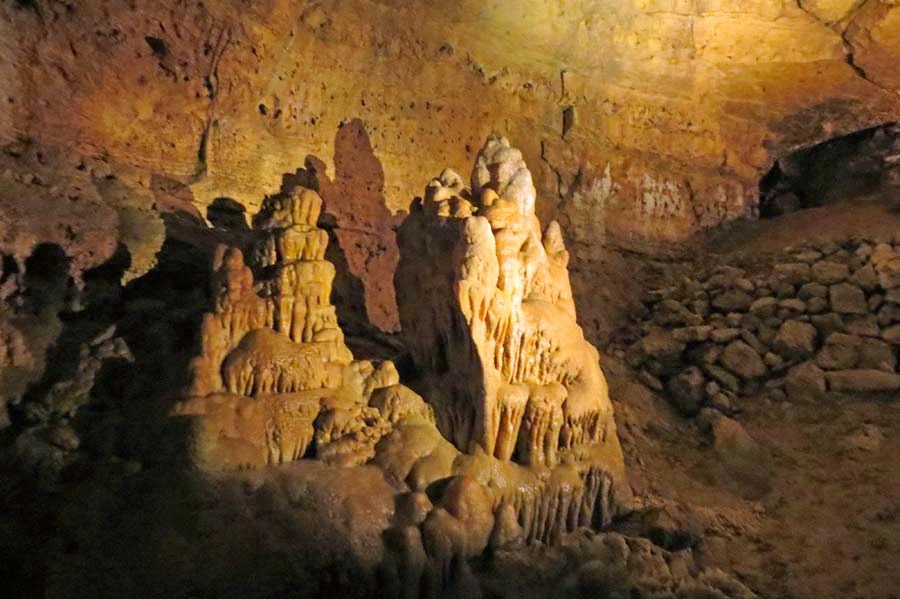 Although there were several large chambers, we did have to squeeze through narrow slots to get from room to room. 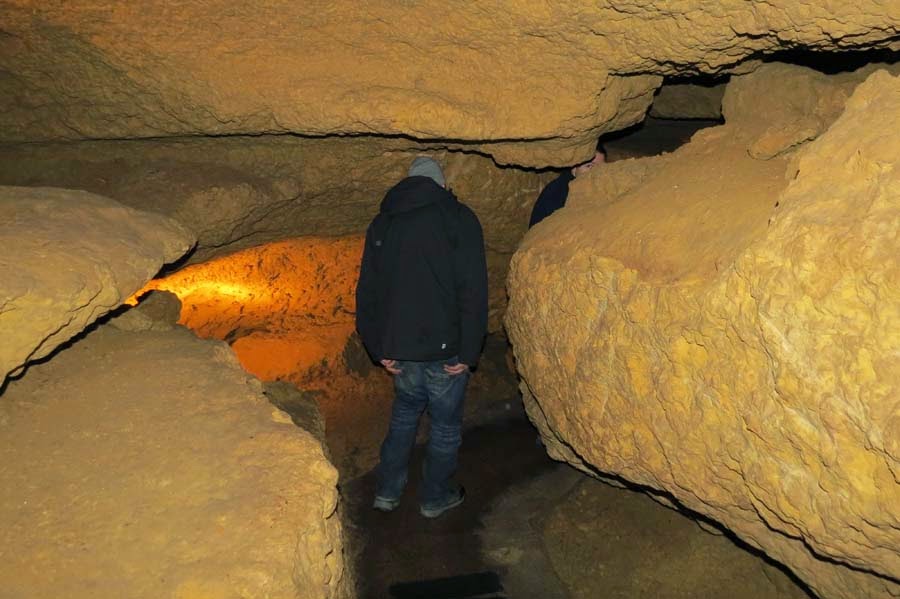 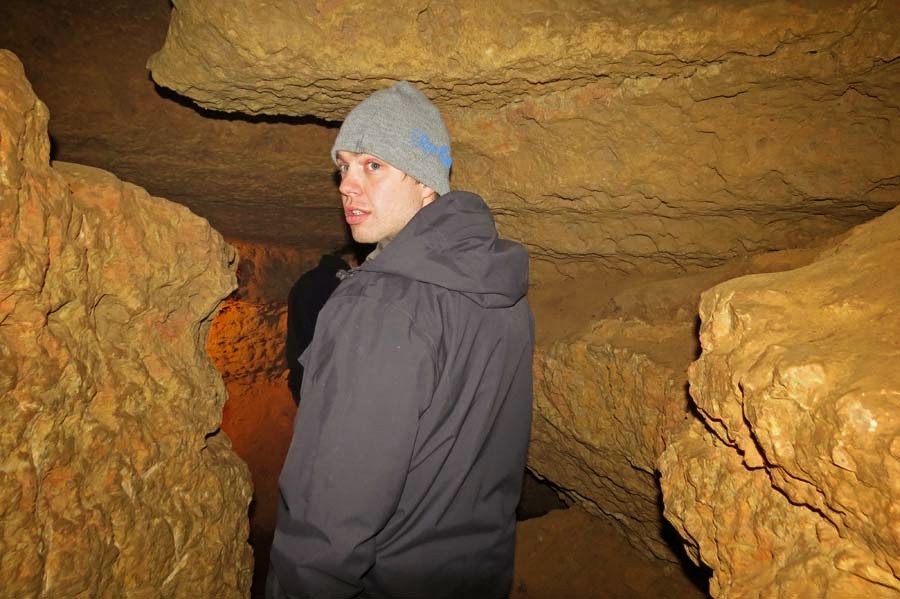 The photo below shows one of the cracks in the cave's ceiling that allows water to drip into the cave.  All through the tour, we were dripped on by water that seeps through the cracks.  According to our tour guide -- this is good luck! 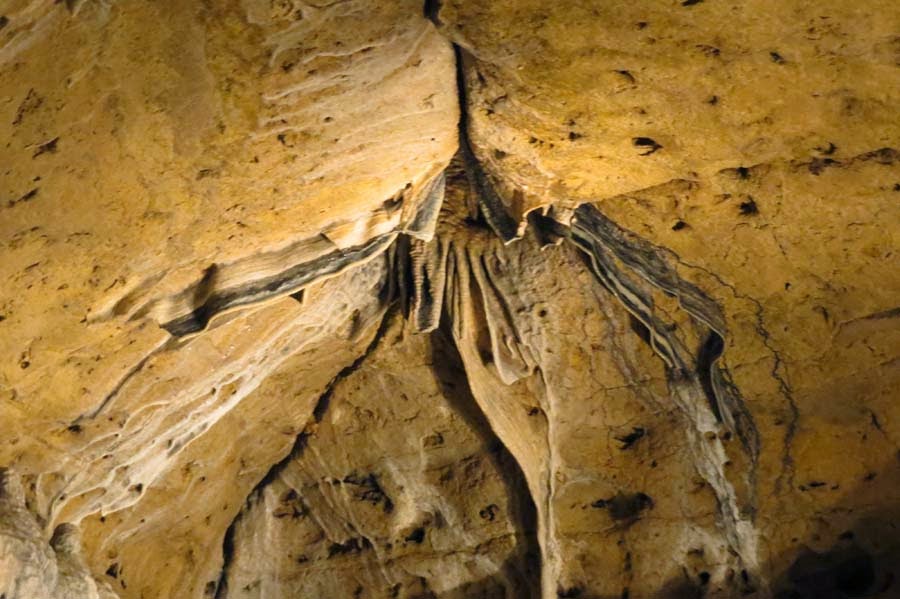 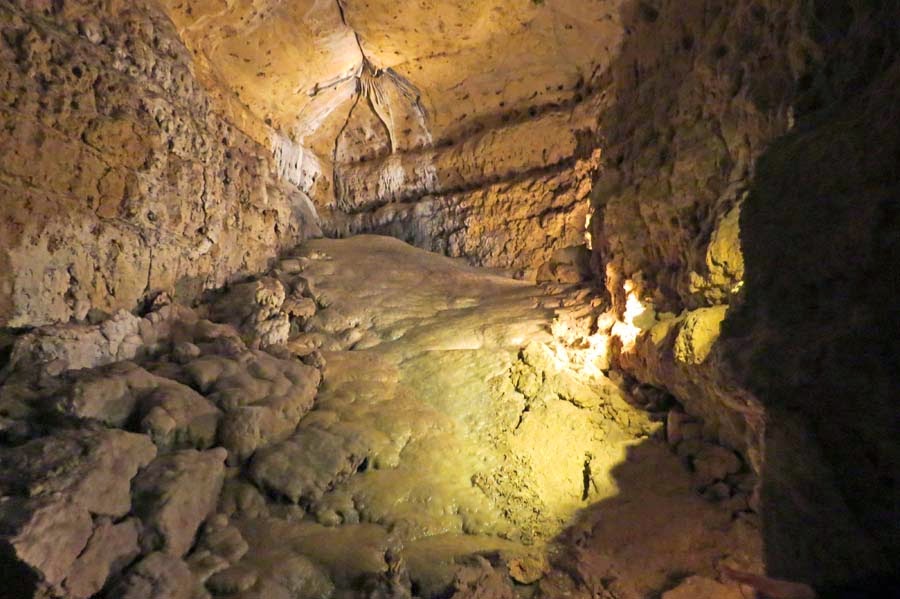 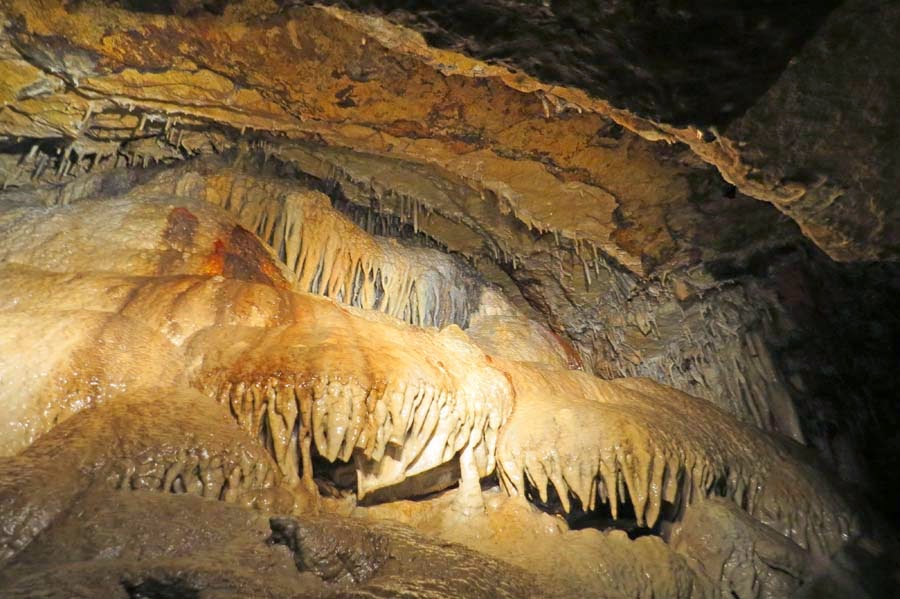 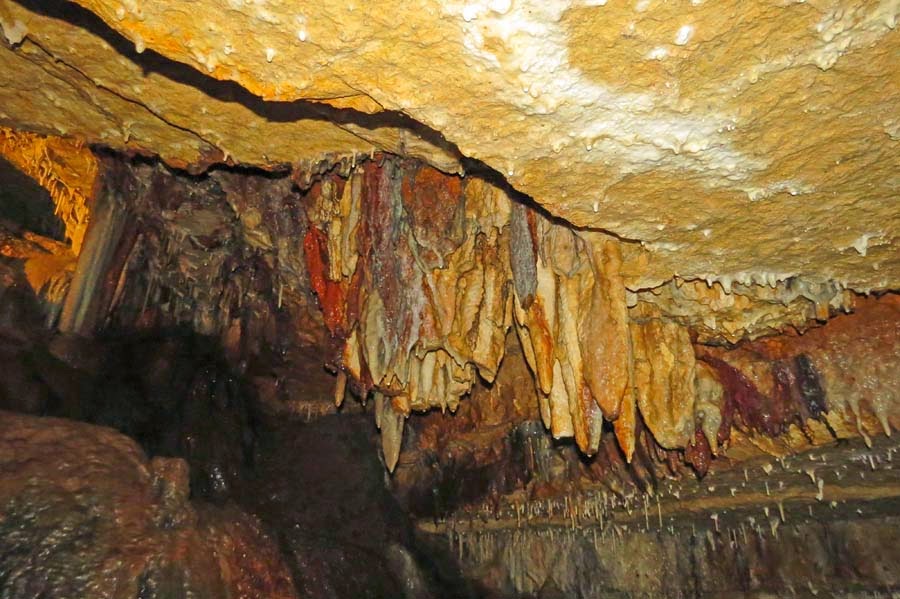 There is not a lot of standing water in the cave, but there are a few pools in the lower chambers. 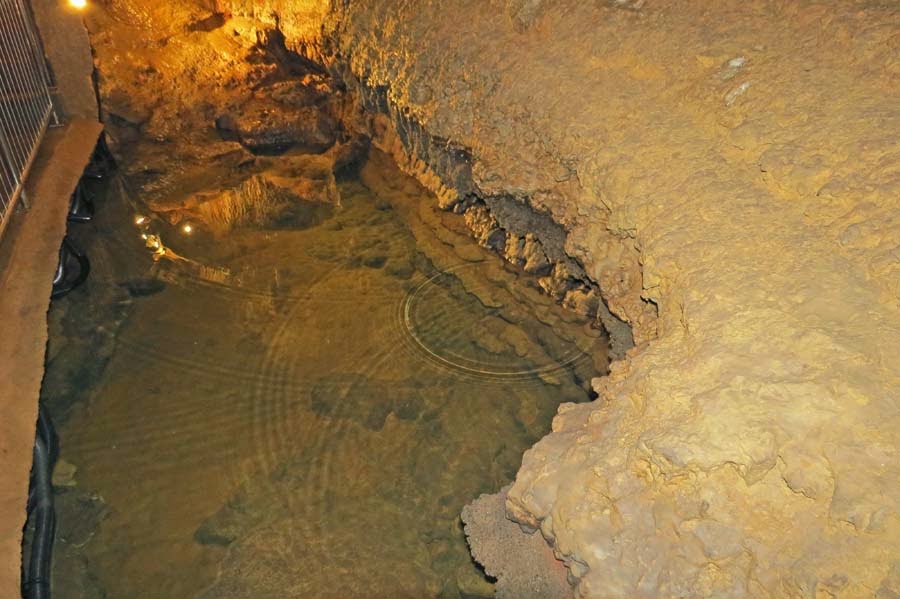 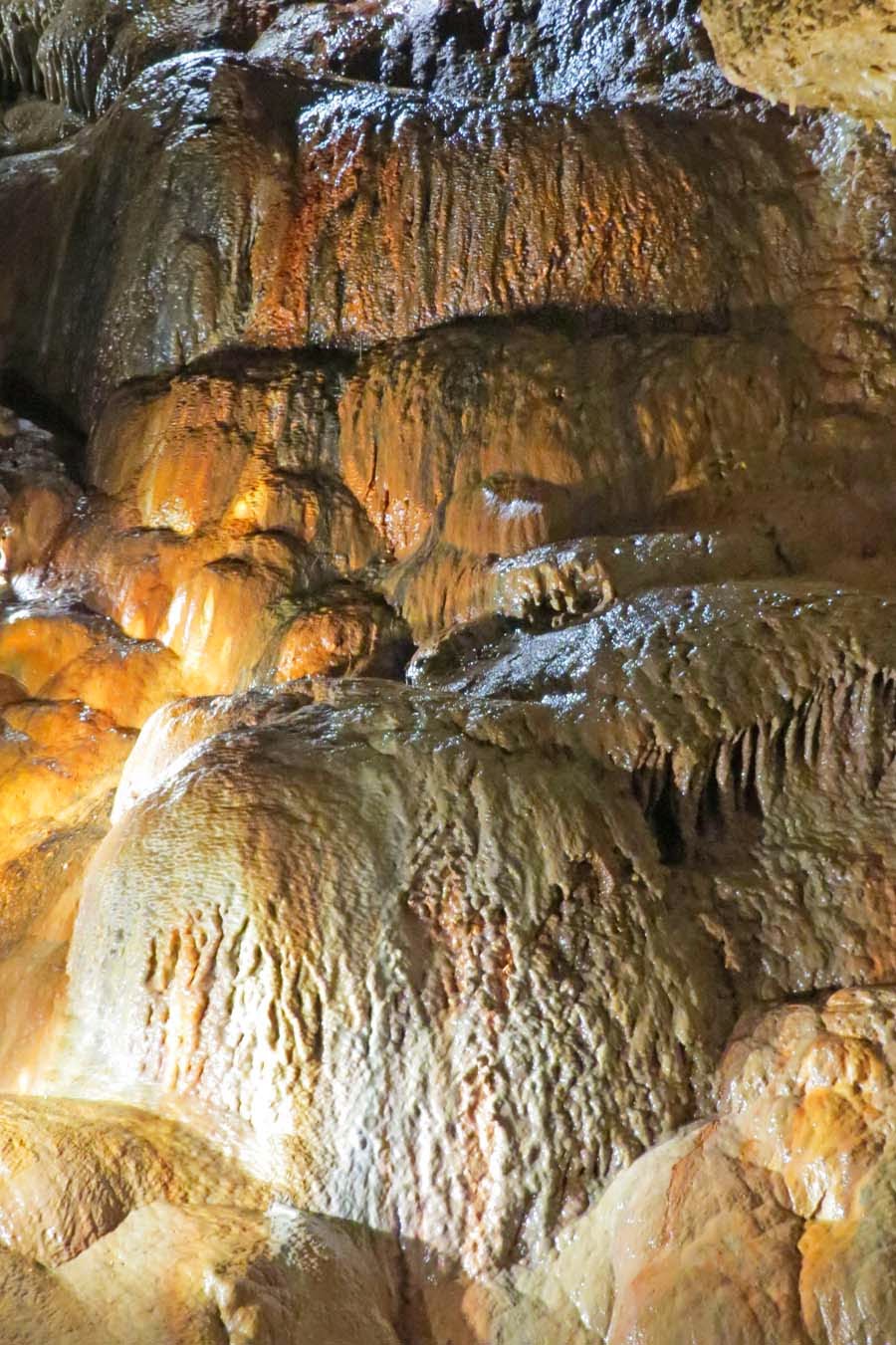 Some of the formations are broken, which was caused by an underground flood. 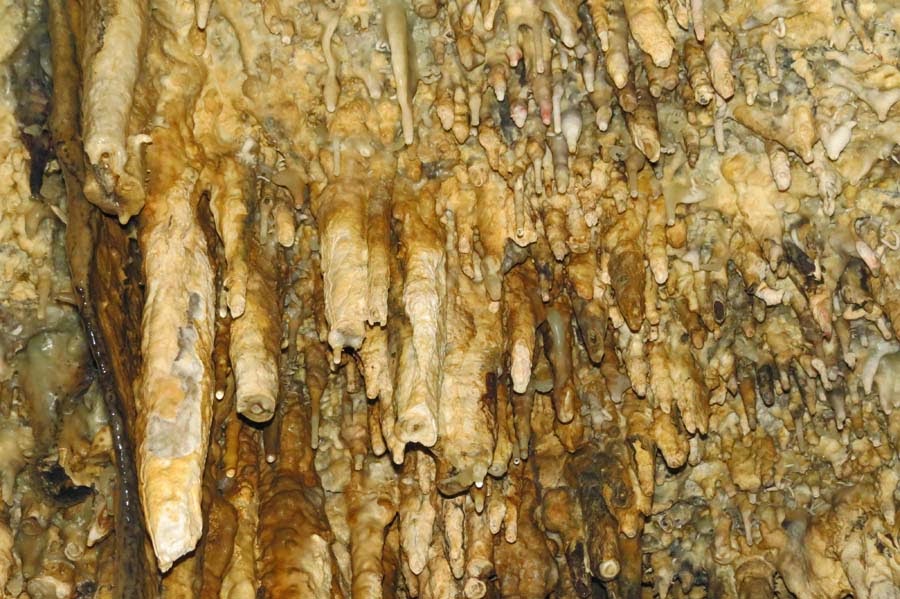