One of my favorite NASA webpages is: http://earthobservatory.nasa.gov/.  I'll feature a few recent posts from this page in today's blog update. 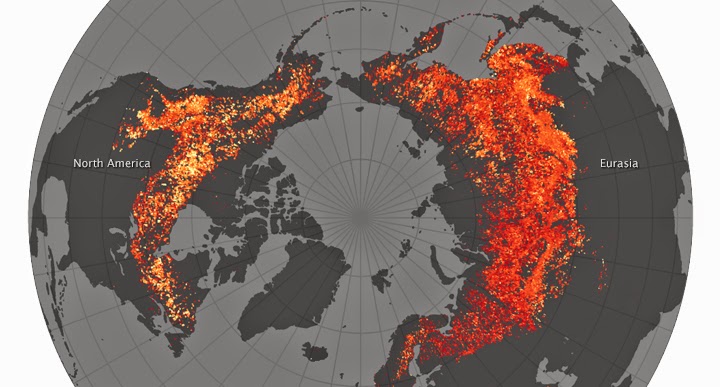 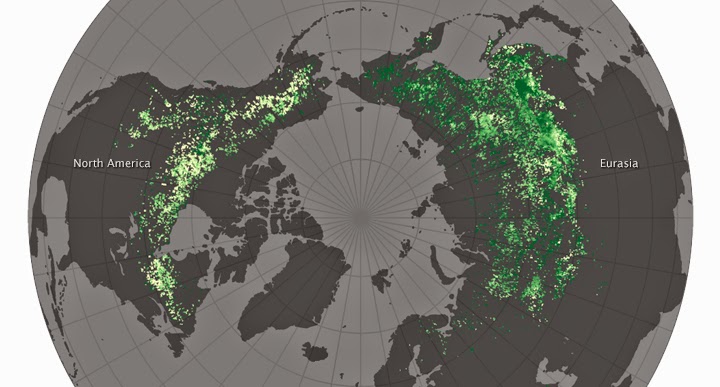 In the high latitudes of the northern hemisphere, much of the landscape is covered by boreal forest, or taiga. These regions are incredibly rich in organic matter (carbon), and they are also prone to intense fires that can send smoke thousands of miles downwind. These evergreen forests make up one-third of Earth’s forested area, so their fires play an important role in regional and global climate patterns. That role is evolving as the world warms.

In new research published in Nature Geoscience on February 2, 2015, scientists described how fires burn differently in the northern tier of North America compared to the northern tier of Eurasia despite very similar conditions. Combining ten years of satellite data with computer models and ground-based observations, the researchers found that boreal forest fires in North America spread faster, burn hotter and longer, send smoke higher into the atmosphere, and kill more trees than fires in Eurasia. This satellite view aligns with previous ground-based observations that North American forests are more prone to crown fires—which burn from the floor to the tree tops—while Eurasia has more surface fires.

The maps above show the continental differences in boreal forest burning. The top map shows fire radiative power, a measure of the intensity of the fires; specifically, the energy released from fire (in megawatts). The second map shows the change in albedo, or how the land surface reflects light. Note that the maps look down on the North Pole, with North America on the left and Eurasia on the right. In both maps, the brighter colors represent the greatest changes.

In the new study, Rogers and colleagues found that burn severity was 37 percent lower in the boreal forests of Eurasia than in North America, and there was 65 percent less change in albedo. Destruction of trees and of overall vegetation was 35 to 40 percent lower from fires in Eurasia. The researchers deduced that fires in North America have an overall cooling impact in the first decade because of increased spring albedo, those in Eurasia may be warming or closer to climate-neutral. 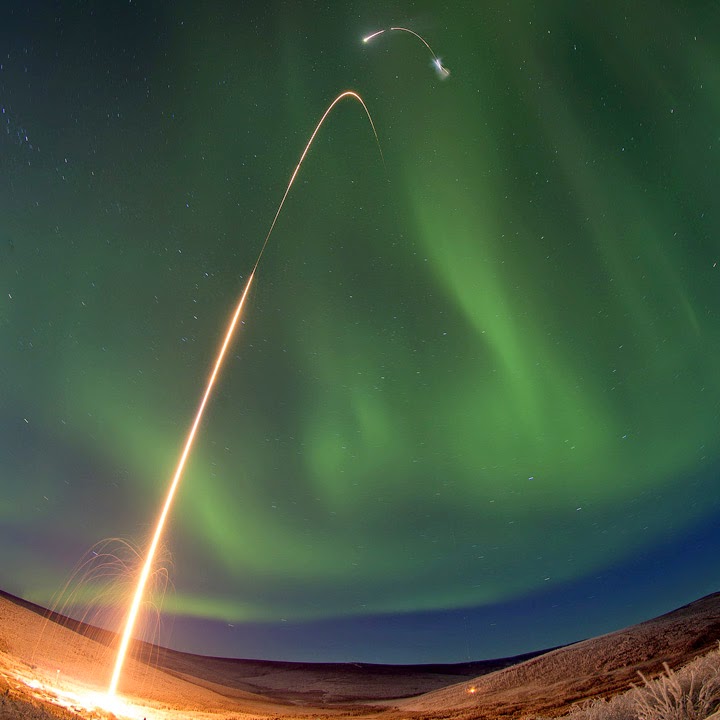 The interaction of the solar wind—variable streams of charged plasma from the Sun—and Earth’s atmosphere produces auroras. These northern and southern lights dance across the night sky and have mesmerized and inspired observers for centuries. For scientists, this dance of light also leads to many questions about how space weather affects Earth’s atmosphere.

In late January 2015, NASA-funded scientists launched a rocket-borne experiment into the northern lights in order to learn more about how they heat the planet’s atmosphere. The Auroral Spatial Structures Probe (ASSP) was launched at 5:41 a.m. on January 28 from the Poker Flat Research Range about 50 kilometers (30 miles) north of Fairbanks, Alaska.

If you click on this link http://earthobservatory.nasa.gov/IOTD/view.php?id=85207&eocn=home&eoci=iotd_previous, there is a video (almost seven minutes) of this NASA funded experiment. 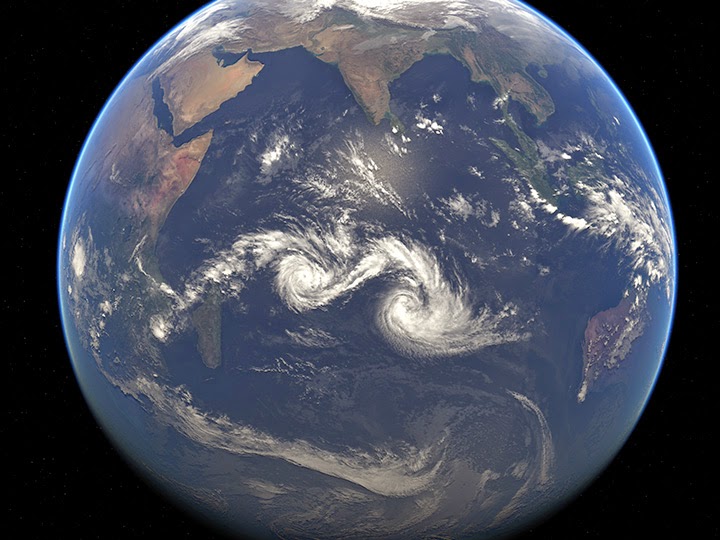 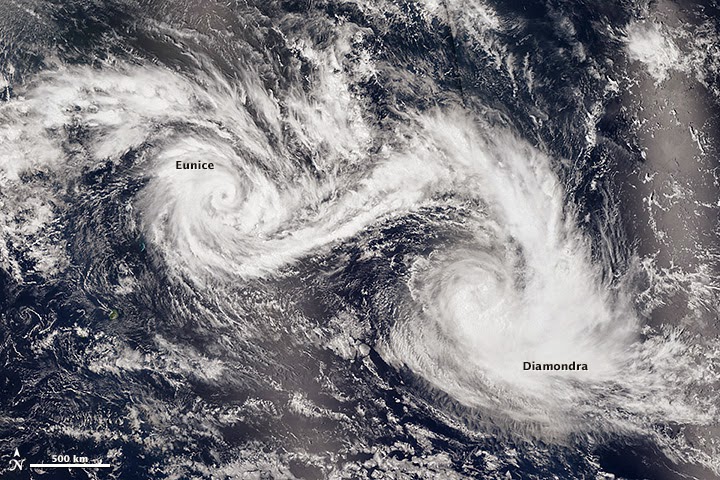 In January 2015, two tropical cyclones— Diamondra and Eunice—swirled over the central Indian Ocean.  The two storms were about 1,500 kilometers (930 miles) apart on January 28, 2015.  Eunice had maximum sustained winds of about 160 kilometers (100 miles) per hour, while Diamondra’s maximum winds topped out at about 100 kilometers (60 miles). Both storms were moving in a southeasterly direction. 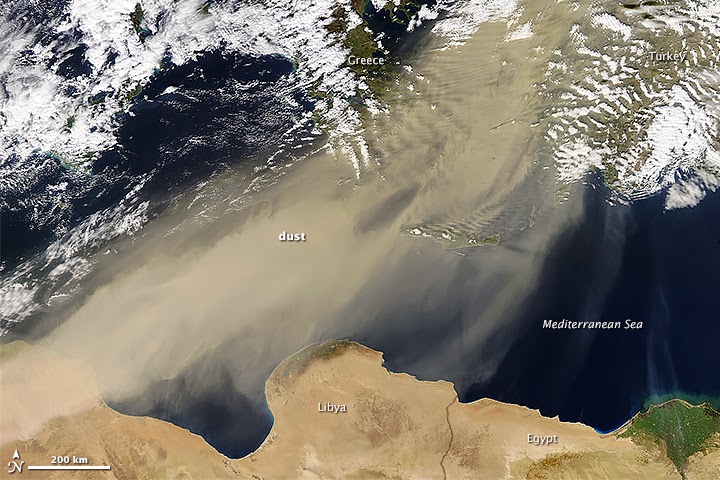 On February 1, 2015, a NASA satellite acquired this image of a large dust plume from North Africa that swept northeast over Mediterranean Sea. According to an NPR news blog, the dust interrupted ferry traffic and flights, and turned the sky orange in Istanbul. 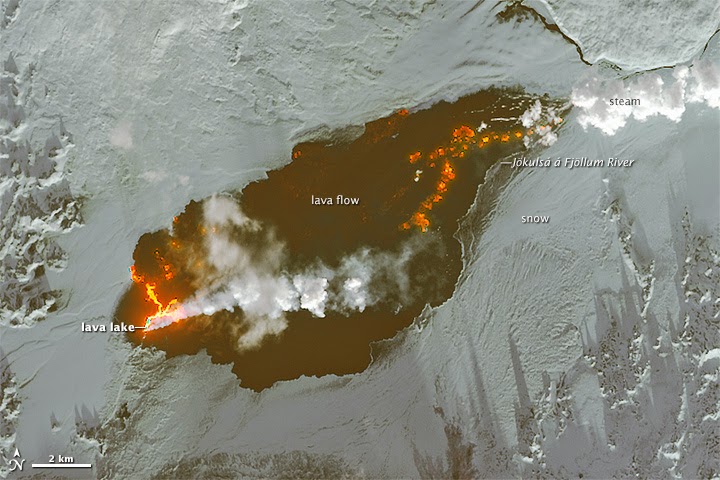 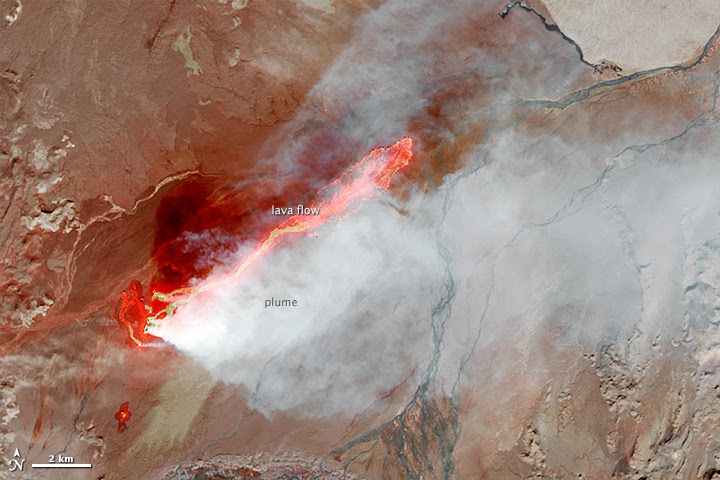 Since August 2014, lava has gushed from fissures just north of Vatnajökull, Iceland’s largest glacier. As of January 6, 2015, the Holuhraun lava field had spread across more than 84 square kilometers (32 square miles), making it larger than the island of Manhattan. Holuhraun is Iceland’s largest basaltic lava flow since the Laki eruption in 1783–84, an event that killed 20 percent of the island’s population.

Cyclones:  NASA, the National Oceanic and Atmospheric Administration, and the Department of Defense. Caption by Adam Voiland.